As of this week, I’m still enjoying the preview photos and information about NARS’ Andy Warhol cosmetics collection for fall. The way things go, it’s only a matter of time before saturation sets in, but I’ve gathered a handful of other Warhol-themed items for autumn inspiration.

(You can read Part One here.)

Even Campbell’s has caught Warhol fever this fall: they’ve just released a limited edition of its classic Tomato Soap in Warhol-inspired cans. What comes around, goes around! (available at Target stores) 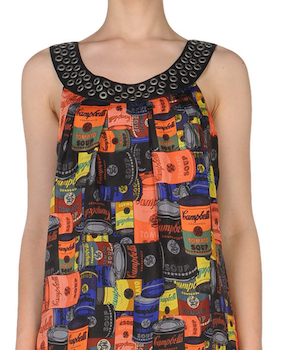 If, on the other hand, you’d rather wear your Warhol soup cans than keep them in the kitchen cupboard, here’s a cute minidress from Pepe Jeans. I can imagine an Edie Sedgwick lookalike wearing this. ($198 at Yoox)

Loop NYC offered an extensive range of Andy Warhol tote bags a few years ago. They were produced in collaboration with the Warhol Foundation, and they looked great and held up well. (I bought the flower design, and I still use it.) You can still track them down on eBay and overstock sites, if you hunt a bit.

A little bit Pop, a little bit Goth: Warhol’s “Skull” image, centered on the face of a watch. Talk about a memento mori. ($130 at Puremodern)

Can’t decide on a favorite Warhol motif? That’s ok. You can pick up a set of Warhol-themed buttons on Etsy and decorate your jacket or backpack or bulletin board with them. (Not official Warhol merchandise: we’re living dangerously here!). (about $15 from Etsy seller My Secret Garden Store)

If you’ve been feeling the back-to-school mood of early September, or you just need a place to jot down sudden thoughts, you might like to carry this “idea book” with you. Andy would approve. Also, the Museum of Modern Art store carries a range of official Warhol items, so you may want to browse online. ($18.95 at MoMA Store)

If you’re in a certain tax bracket, and you’ve been lamenting the absence of an actual Warhol work in your art collection, here’s some good news for you: the Andy Warhol Foundation for the Visual Arts will begin auctioning its remaining holdings through Christie’s this fall. You can read the whole story here.

Are you planning on purchasing any NARS Warhol makeup next month? Do you own or covet any other Warhol-themed objects? Feel free to share!