Although I didn’t find the first season of the new “Upstairs, Downstairs” (2010) all that riveting, I tuned in to watch the first episode of the second season on PBS on Sunday night. I’m glad I did, not only because the writing and plotting seemed a little better this time around, but because the episode featured a wonderful cameo appearance of a classic perfume.

At the opening of the episode, Lady Agnes Holland is recuperating from a difficult childbirth in her private hospital room. When she suddenly makes the decision to return home to Eaton Place, her imminent arrival sends the household into a bit of a tizzy.

While the cook, Mrs. Thackeray, discusses Lady Holland’s inappropriate (and unhygienic!) choice of a taxi for her ride home, butler Mr. Pritchard places a bottle of perfume (complete with atomizer pump) on the kitchen table. Why?

A minute later, he inserts a freshly filled hot-water bottle into a lace-trimmed linen case and hands it to the footman Johnny, with instructions to put the bottle in Her Ladyship’s bed, “eighteen inches from the bottom, placed slightly to the left.” And he spritzes it with the perfume atomizer.

It’s a historically accurate reference to two classic Guerlain fragrances. Mitsouko was released in 1919, Shalimar in 1925. Both are complex, opulent fragrances that would have been luxury items in 1938, as they are now.

You can read more about both  fragrances at my friend Victoria’s blog, Bois de Jasmin, here and here. 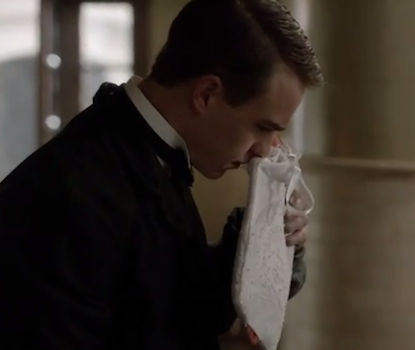 You should probably try to smell them both at some point, too.

Images: my own screen captures from the PBS website.