I went to see “The Talented Mr. Ripley” in the theater when it was released in 1999, and I’ve re-watched it multiple times over the years. I enjoy this movie for many reasons—Italian locations! 1950s fashions! tightly plotted psychological suspense!—and a perfume moment never hurts.

In one scene, Tom Ripley (played by Matt Damon) sits at a portable typewriter to compose a letter that he will then sign as “Dickie Greenleaf,” another major character. (This story includes many themes of doubling and assumed identities; that’s all I’ll say.) Next to the typewriter sits a package from the venerable Florentine apothecary and perfumery Santa Maria Novella.

He inserts the finished letter into the perfume package. True perfume-obsessives will recognize the Santa Maria Novella crest at a glance, although the brand is never mentioned by name. 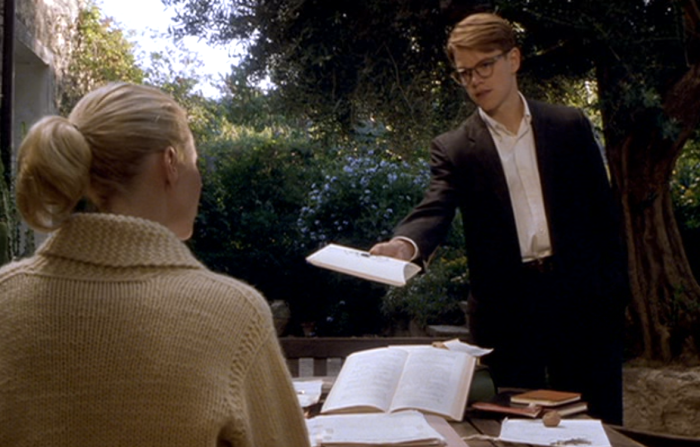 Ripley then visits Marge Sherwood (played by a pre-GOOP Gwyneth Paltrow) and presents her with the package, which she was expecting her boyfriend Dickie to bring back from Rome. (I suppose SMN products would have been available in Rome as well as Florence?) They exchange a few words about the gift:

TOM: He was thinking of you. He asked me to deliver this.

MARGE: Thank you. He knows I love this. Although why it couldn’t have waited…

I’ve just checked the original source of this movie, Patricia Highsmith’s novel The Talented Mr. Ripley (1955) to see whether perfume made a cameo appearance. Yes, with a significant difference:

“I’d appreciate it if you’d try to find that cologne, Dickie,” she said. “You know, the Stradivari I couldn’t find in Naples. San Remo’s bound to have it, they have so many shops with French stuff.”

“By the way!” Tom reached for the suitcase and took out the box of cologne. . . . “Your Stradivari. We got it in San Remo.” 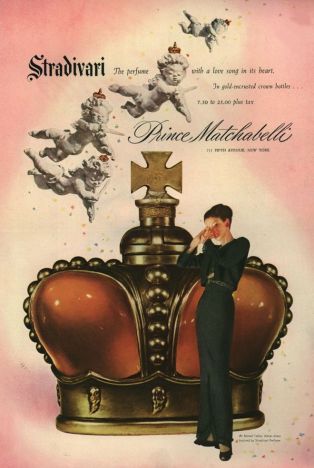 Highsmith most likely meant Prince Matchabelli’s Stradivari, which was in production in the 1950s. Anthony Minghella (screenwriter and director), or someone else involved with the 1999 film version, gave expatriate Marge a taste for Italian fragrance rather than French imports.

Which Santa Maria Novella perfume do you think Marge might have loved?