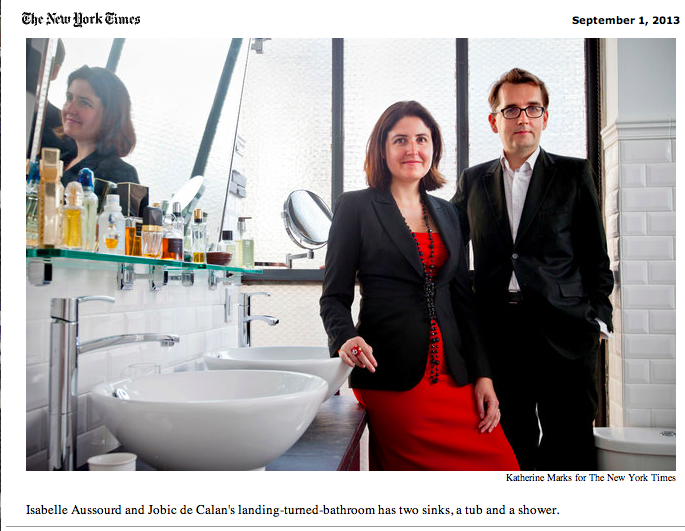 I don’t know why I even bother to read the Real Estate section of The New York Times. I’m not looking for a new place, and even if I were, I’m certainly not in the same income bracket as the people they feature in columns like “The Hunt” or articles like today’s “The Gold Mine in the Hall,” about older apartment buildings that repurpose former hallway closets or unused stairwells as additional rooms for existing apartments.

Here’s the story behind the bathroom in the picture above:

“In 2010 Isabelle Aussourd and her husband, Jobic de Calan, bought a one-bedroom at 205 East 69th as well as an adjacent studio and a 42-square-foot landing. . . . “’The person we bought from was planning to combine the spaces and hadn’t done so,’ said Ms. Aussourd, a banker, who paid $935,000 for the entire parcel, ‘but she had a floor plan.

‘Having the hallway space, we were able to have a really nice bathroom with a double sink, a bathtub and a separate shower,’ she added. “The hallway had an industrial-size window, so we have two windows in the bathroom. Everyone who comes to visit wants to go look at it.'”

Looking at this photo, all I can think is that these people (despite all their money) don’t know that you shouldn’t keep perfume in the bathroom. I’m seeing two Chanel fragrances and a SERGE LUTENS BELL JAR on that shelf. Sacrilege. Can you identify any of those other bottles, which have probably been ruined by the high-end humidity in that bathroom?

11 thoughts on “Things That Make You Go Hmmm: Perfume in the (Luxury) Bathroom”