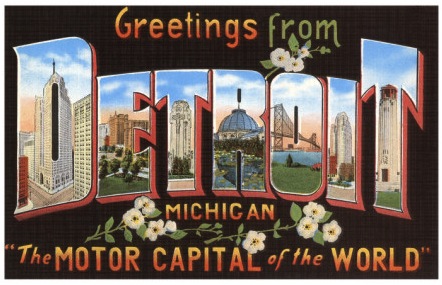 Just over a month ago, Mr. TC and I took a trip to Detroit. I hadn’t been there since I was seventeen, when I visited my friend Joe and his family. Joe relocated back to Detroit a few years ago, and he was kind enough to host this visit as well.

This post isn’t intended to be a thorough documentation of the Motor City circa 2013, or even a complete picture of our trip. Detroit is too big and complex and eye-opening and heart-breaking and tragically beautiful to capture in one story, and furthermore, I didn’t want to interrupt our fun with constant picture-taking.

But here are a few snapshots anyway! 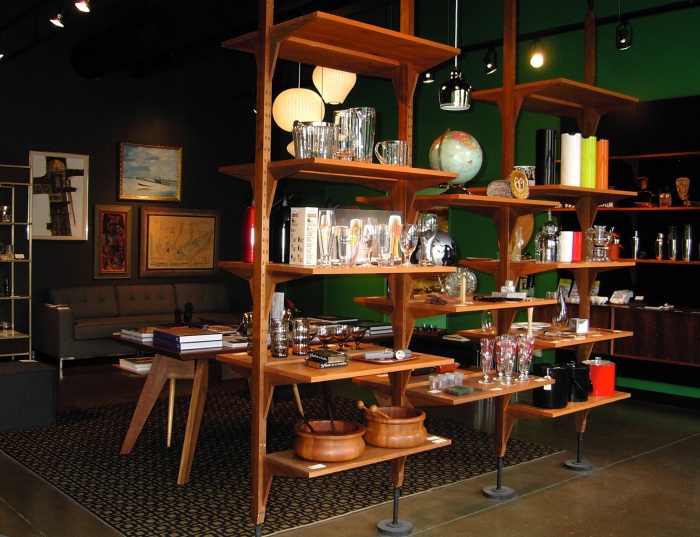 Our first stop was Joe’s store, HUGH, located at 4240 Cass Avenue in Midtown Detroit. HUGH is a purveyor of “Classic Bachelor Pad Style” — and even though I’m not a bachelor, I was drawn to the vintage barware, the Scandinavian-modern tabletop items, the book selection, the funny 1970s ceramic owls and lions, etc.

I’m continually impressed by Joe’s eye for design and his retail skills. (I’m also continually glad that we still enjoy so many of the same things and share a similar sense of humor, even after all these years.) 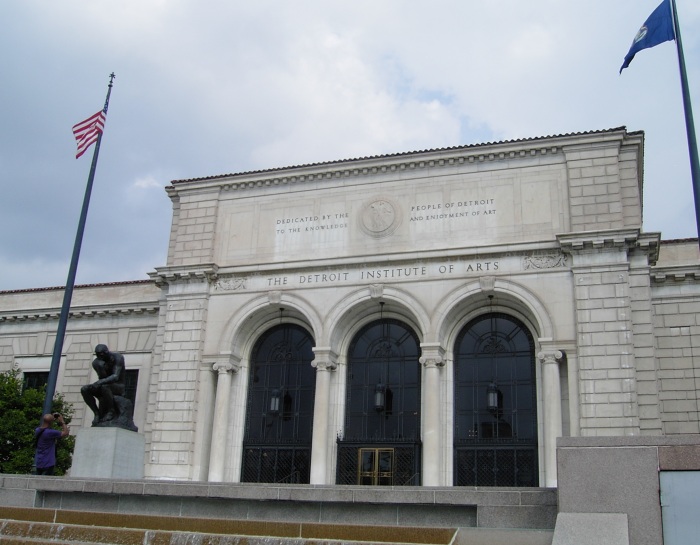 The other must-see stop on my list (besides HUGH!) was the Detroit Institute of Arts. If you follow the arts, you know that the DIA’s art collection is a point of debate in the city’s bankruptcy situation. I won’t get into that here (except to provide this link to a petition you can sign). I was happy to have the opportunity to revisit the DIA, and my awareness of the financial crisis threatening the institution made me value my afternoon there even more. 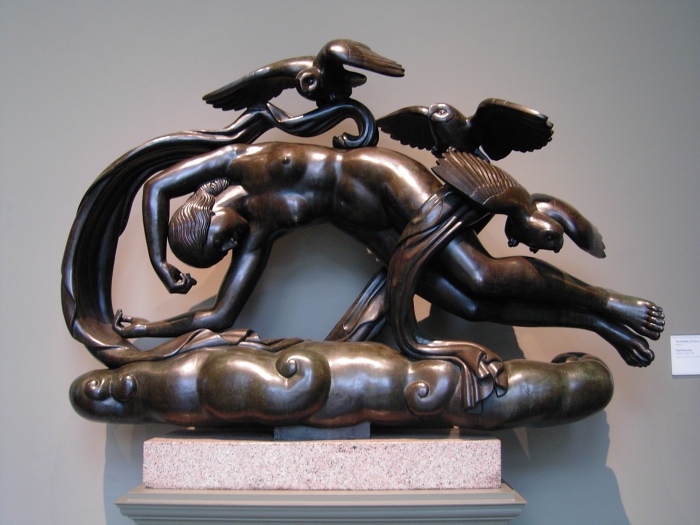 I spent a while in the American art galleries. Look at this Paul Manship sculpture—The Moods of Time: Evening, dated 1938. 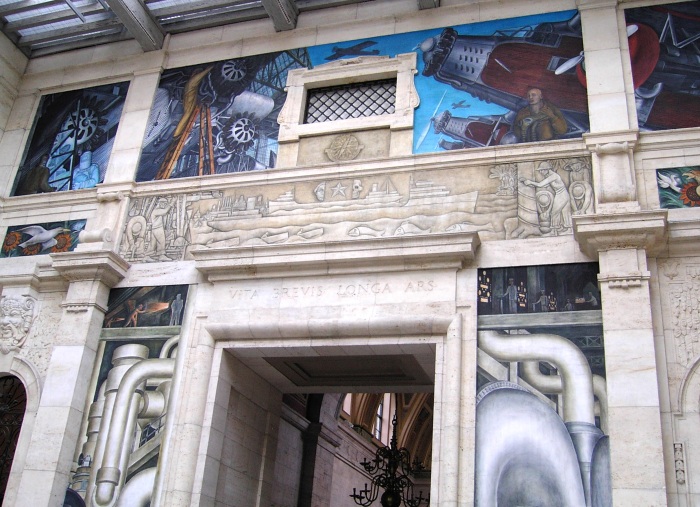 I’ve never been much of a Diego Rivera fan. However, walking into the interior courtyard gallery that Rivera transformed with scenes of Detroit industry (and of the longer history of science and industry) in 1932-33, I suddenly “got” this artist. 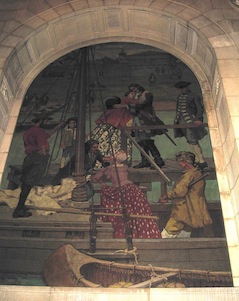 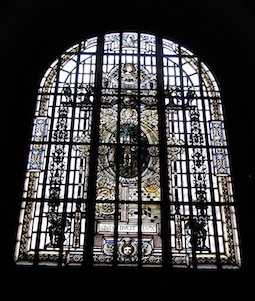 Then we paid a call to the Detroit Public Library, just across the street from the DIA. I was completely unprepared for the Renaissance Revival grandeur of this building (designed by architect Cass Gilbert), with all its murals (like this one by Gari Melchers) and stained glass windows (dedicated to the various arts). 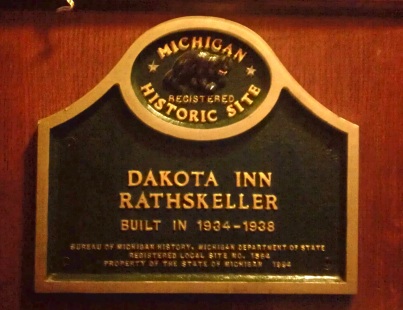 It wasn’t all high culture during this visit—Joe also took us to some local dining establishments, like the Blue Pointe and the Dakota Inn. The Dakota happened to be kicking off its Oktoberfest celebration, so we enjoyed live music and a very lively crowd ambiance along with our bratwurst and sauerbraten and beer. 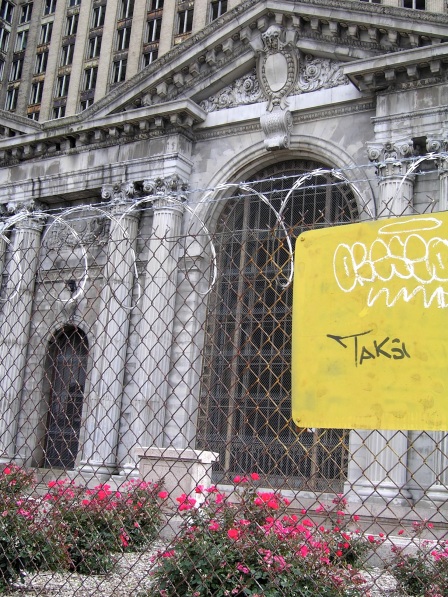 We spent a few hours at a fall festival in Roosevelt Park, facing the now-empty Central Train Station (pictured above—fenced off, alas). A temporary roller rink had been staged in the street in front of the station, and the annual “Cornhole Championship” (a local variant on the beanbag toss!) was taking place. 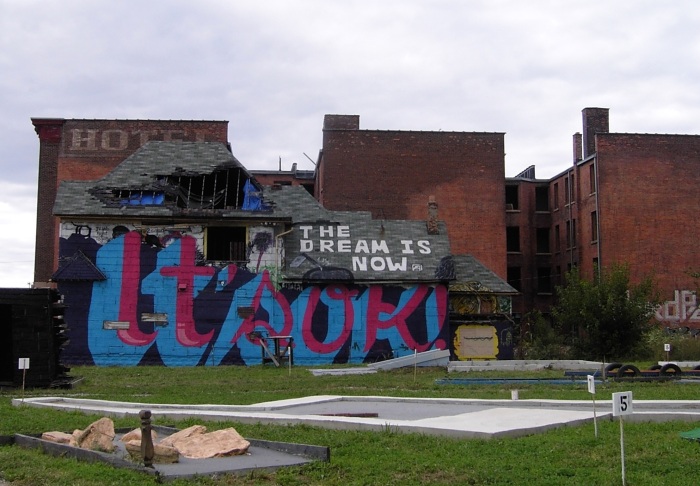 Yes, we did drive through many neighborhoods that have been hit by urban blight. We also spied signs of renewal, like this “Imagination Station” with its playground and mini-golf course, and some fledgling businesses like a wine bar and a diner that wouldn’t have been out of place in Williamsburg, Brooklyn. And then more areas of ruin and neglect and destruction. And then some historic neighborhoods with the most lovely private homes and apartment buildings that you can imagine. It’s quite a mix. 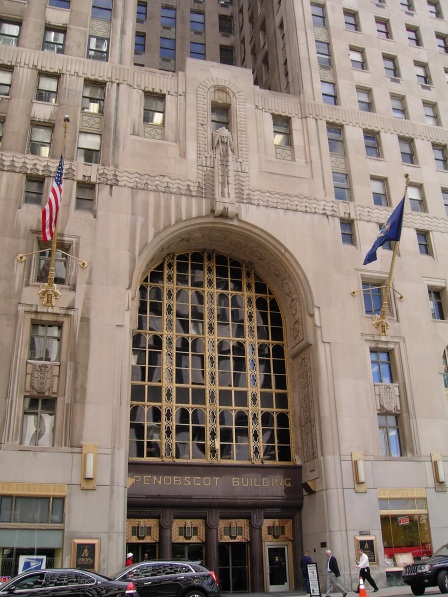 The Art Deco architecture that has been preserved in central Detroit is peerless. Here’s an exterior shot of the Penobscot Building (1928). Note the American Indian chief above the arch! 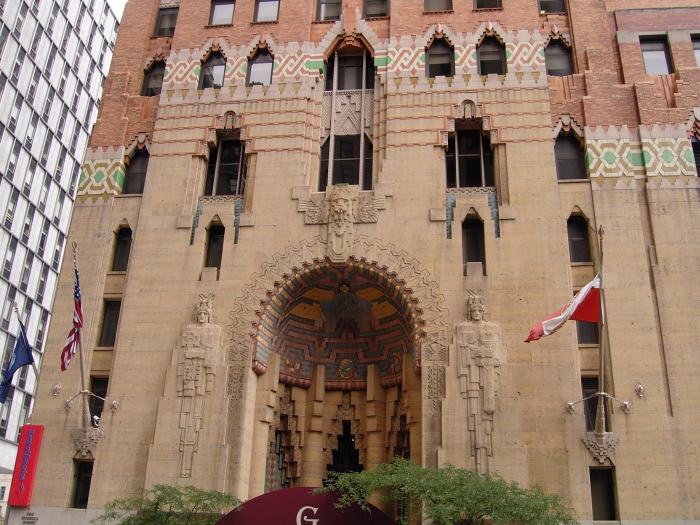 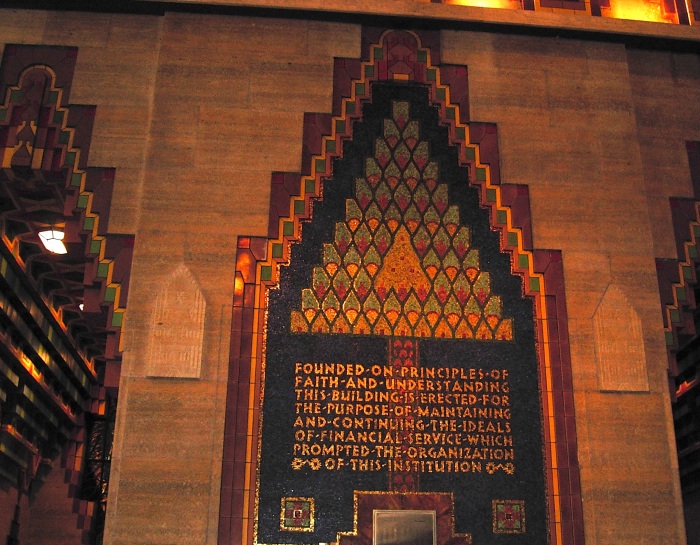 The Guardian Building is decorated with mosaics, inside and out. This one is located just off the main lobby. 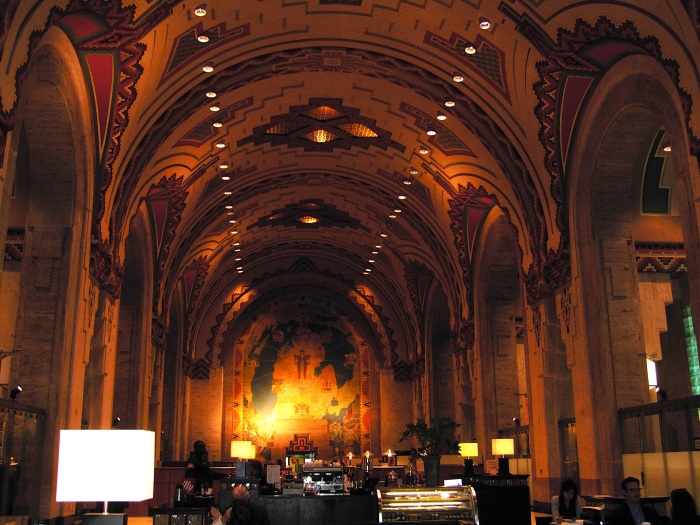 The building’s main banking area, with its colorful Pewabic tile decorations and a mural of Michigan (by artist Ezra Winter) is now a cafe. Mr. TC and I had a cup of coffee under those grand vaulted ceilings. 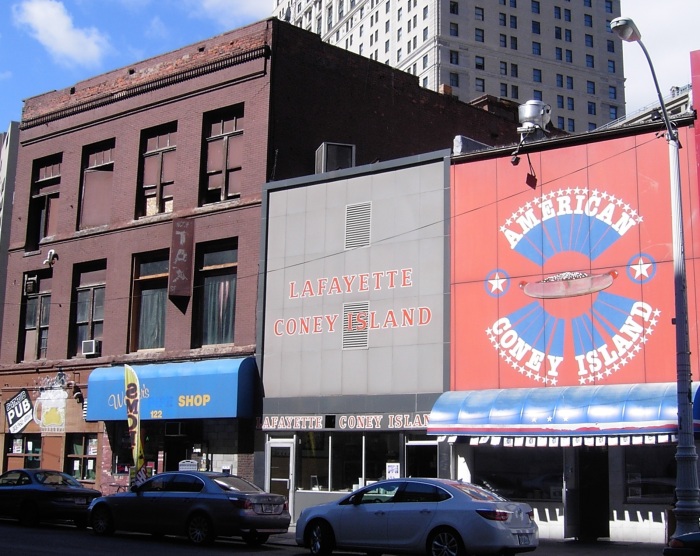 And, at the suggestion of our friend Dennis (a Detroit native!) we lunched on “Coneys” at Lafayette Coney Island. I was initially confused by this terminology—it’s a very Michigan thing. In the Detroit area, a “Coney Island” is a hot dog topped with chili, onions, and mustard. It is also the type of restaurant where this delicacy is served.

So, I had a Coney at a famous Coney. It was delicious. 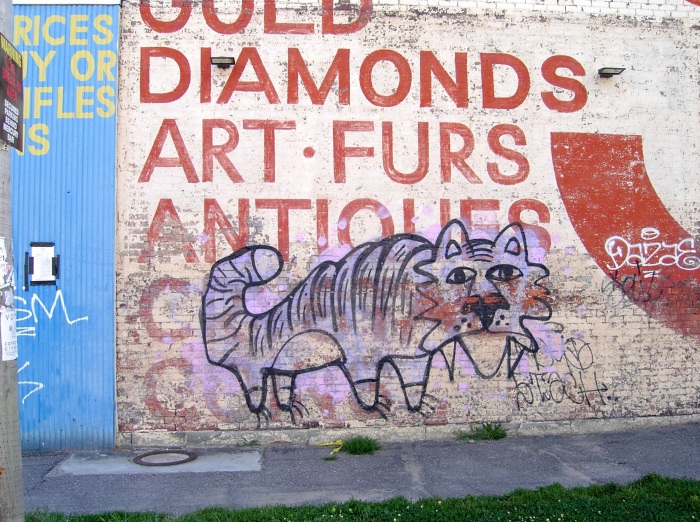 I really didn’t want to walk around (or, more accurately, ride around in Joe’s car) taking dozens of photos of ruined buildings and graffiti, because that would feel rude and gawkerish. Other than the “It’s OK!” shot further up the page, this was my only graffiti photo. I didn’t realize until halfway through the trip that the tiger graffiti I kept spotting were homages to the Detroit Tigers. I liked them anyway.

Have you ever been to Detroit? Do you know anyone there? If you do visit Detroit any time soon, make sure you shop at HUGH. And have a Coney Island for me.

(Thank you, Joe, for being such an excellent host-guide and for making this visit such a treat!)