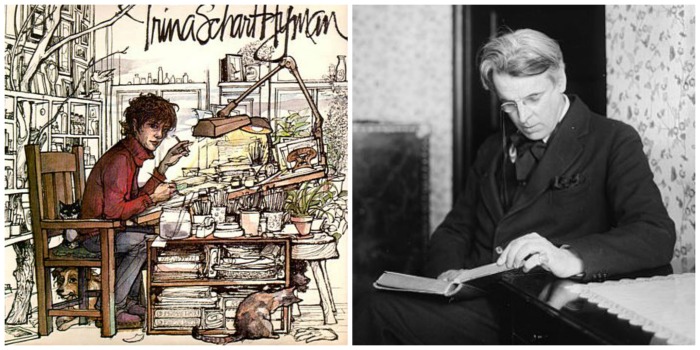 This is my fourth and final post in honor of William B. Yeats’s 150-year anniversary. I’m backtracking all the way to my initial encounter with Yeats’s poetry.

Cricket magazine published “The Song of Wandering Aengus” in its September 1974 issue, as a two-page spread with an illustration by Trina Schart Hyman (1939-2004).

There’s so much I could write about Cricket‘s influence on me, and about Hyman’s art, but I’ll just share this image with you (thanks to Katie Bee on Pinterest).

I went out to the hazel wood,
Because a fire was in my head,
And cut and peeled a hazel wand,
And hooked a berry to a thread;
And when white moths were on the wing,
And moth-like stars were flickering out,
I dropped the berry in a stream

And caught a little silver trout.

And faded through the brightening air.

Though I am old with wandering
Through hollow lands and hilly lands,
I will find out where she has gone,
And kiss her lips and take her hands;
And walk among long dappled grass,
And pluck till time and times are done,
The silver apples of the moon,

The golden apples of the sun.

(As a child, I was entranced by the illustration; later, I puzzled over the poem enough times to memorize it. Now it makes me cry every time I read it.)