I bought my first bar of Victoria Lanolin-Ägg-Tvål Eggwhite Facial Soap somewhere between four and five years ago, at New London Pharmacy in New York. I liked the soap so much that I went back for a box of six bars, and it became part of my nightly skincare ritual. 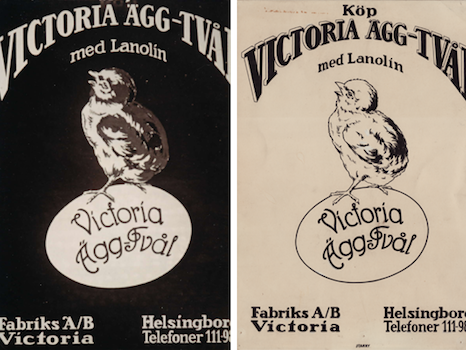 Victoria has been producing its Eggwhite Facial soap since the early twentieth century, and I can see why it’s been such a long-term success for the company. It’s simple but very effective, it combines conventional soap-y ingredients with egg white and rosewater, it’s affordable and long-lasting, and it really does have the sweetest packaging.

But something strange happened about a year ago. I noticed that my usual shopping destinations for this soap, New London Pharmacy and  C. O. Bigelow, had both run out of the soap and didn’t seem to be restocking it. In  a panic, I ordered a six-pack from a website called The Soap Bar. Had Victoria decided to discontinue Eggwhite Facial Soap? 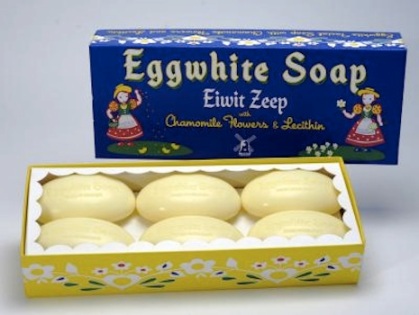 Then something even odder happened: Bigelow and New London, as well as online sources that I found through Amazon, were instead stocking something that looked similar to Eggwhite Facial Soap. It had same size box, with six small soaps nestled inside a scalloped border, and a folk art-inspired cover printed in blue and red and yellow with two girls instead of two hens. The ingredients of this “Eggwhite Soap” were also similar, but not identical. Hm.

Then I found this: a public record indicating that Kala Corporation, which had been the United States distributor for Victoria’s products as long as I’d known about them, was being sued by Victoria for copyright infringement. Curiouser and curiouser. I can only speculate what must have happened earlier in 2011, but if Victoria chose to stop distributing its very popular Eggwhite Facial Soap through Kala, then Kala very well may have decided to source or produce its own copycattish variation on the product. And Victoria would have been (justifiably) angered.

Anyway, back to me. What would I do when my last box of soap was depleted?! 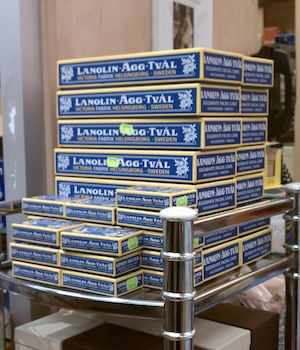 Then fate, or a new distributor, intervened: on my last visit to New London Pharmacy, about two weeks ago, I spied a fresh shipment of Victoria Lanolin-Ägg-Tvål Eggwhite Facial Soap. A friendly staff member said that I wasn’t the only one who was so happy to see it again.

Here it is, my “holy grail” of facial soap, in its new packaging. It’s now called Eggwhite Facial Care. The chickens have been joined by some Art Nouveau-style decoration and by marks of all the honors and special appointments Victoria has received over the years. The soap itself is unchanged, thank goodness.

And here’s a look at the back of the single-bar box, with a list of ingredients.

For more information about Lanolin-Ägg-Tvål Eggwhite Facial Soap, you can visit the Victoria website here. You can purchase the soap at the stores I’ve already mentioned, as well as sites like The Soapbar and ShopLondons. It costs $20-22 for a set of six soaps (each one lasts a month, with daily use) or $3-4 for a single soap. Accept no substitutes!