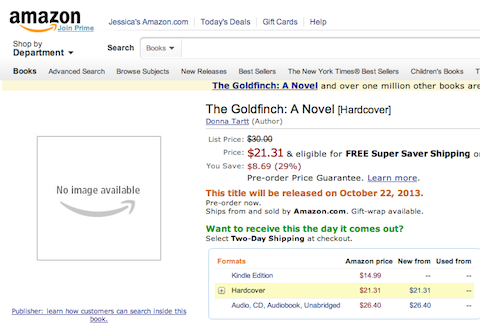 I just learned that Donna Tartt’s third novel will be released later this year. It’s titled The Goldfinch and, according to Amazon, it has a release date of October 22, 2013.

I’ve been meaning for a while to write a post about Donna Tartt. Maybe I will, soon. For now, I’ll just say that her first novel, The Secret History, has been one of my favorite contemporary novels since the year of its publication. I recently created a Tumblr picture-blog in its honor, which you can see here. (Because I never have enough online projects going on at once, apparently.) Do visit! …

The brief description on Amazon reads:

The author of the classic bestsellers The Secret History and The Little Friend returns with a brilliant, highly anticipated new novel.

A young boy in New York City, Theo Decker, miraculously survives an explosion that takes the life of his mother. Alone and determined to avoid being taken in by the city as an orphan, Theo scrambles between nights in friends’ apartments and on the city streets. He becomes entranced by the one thing that reminds him of his mother: a small, mysteriously captivating painting that soon draws Theo into the art underworld.

Composed with the skills of a master, The Goldfinch is a haunted odyssey through present-day America. It is a story of loss and obsession, survival and self-invention, and the enormous power of art.

I’m especially intrigued by the title and its possible meanings. I’m just guessing and hoping, and this is really my own idea (take note!), but maybe there’s some connection with this wonderful (real-life) painting? 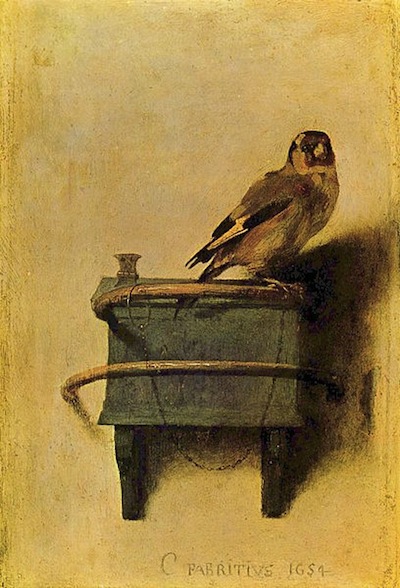 Then again, looking back at a 1992 interview with Tartt in Vanity Fair, I just came across this passage:

Suddenly she spots, with delight, a whirling flock of goldfinches. “Look at these goldfinches – do you see?” she cries. “Goldfinches are the greatest little birds, because they build their nests in the spring, a long time after all the other birds do. They’re the last to settle down – they just fly around and they’re happy for a long time, and just sing and play. And only when it’s insanely late in the year, they kind of break down and build their nests. I love goldfinches,” she sighs, huddling tinily in the big car seat. “They’re my favorite bird.”

So, the goldfinch is a motif that has long held fascination for Tartt. We’ll have to wait and see, but you know me: I always enjoy a good art/literature connection.

2 thoughts on “Good News: Donna Tartt’s Next Novel Has Been Announced and Is Available for Pre-Order”