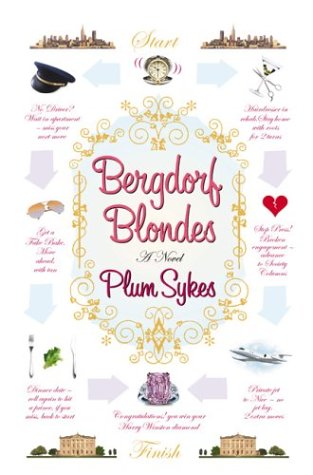 In 2003 I moved back to New York after living in other states for graduate school and work. Things had changed during the decade I was away. I’m nearing the ten-year anniversary of that return, and I’m remembering how surprised I was by certain things that women my age were suddenly saying and doing. They had made manicures a weekly routine, rather than a luxury for special occasions. They teetered through their daily commutes in stiletto heels. They freely discussed their Brazilian waxes on their cell phones in public. They wore 3-carat engagement rings. And they were reading novels from a sub-genre nicknamed “chick lit.”

I never watched “Sex in the City,” which (according to friends) had reportedly inspired or justified some of this behavior. But I did finally pick up one example of “chick lit,” published in 2004: Bergdorf Blondes by Plum Sykes.

This novel is better-written than you might expect, and it’s a clever satire of a certain very narrow stratum of Manhattan womanhood, observed from within. I actually enjoyed it, and I felt I’d gained a bit of insight into the “aspirations” that I somehow failed to share with much of my demographic.

2003-2004 was also the year that I really began to indulge my perfume obsession, so I smiled when I came across these sentences:

I felt a little sad for Charlie all of a sudden. I mean, he was probably an okay person, whether I liked him or not. It’s like that Thierry Mugler perfume, Angel; I loathe it, but it doesn’t mean it’s a bad perfume. I mean, millions of people think it smells totally awesome. I guess Charlie was my Angel, if there’s such a thing as an analogy between men you hate and scents you hate.

Is there such a thing? The perfume blogs that were surfacing in 2004 would have agreed that yes, there is. They discussed fragrance through that kind of analogy, and many, many others…and they still do.

5 thoughts on “My Back Pages: Perfume in “Bergdorf Blondes””