My husband and I share many interests. Two exceptions: a passion for beauty products (mine) and a lifelong devotion to comic books (his). But when he came across this particular Captain America comic book a few days ago, he knew that it would interest me, so he passed it along. 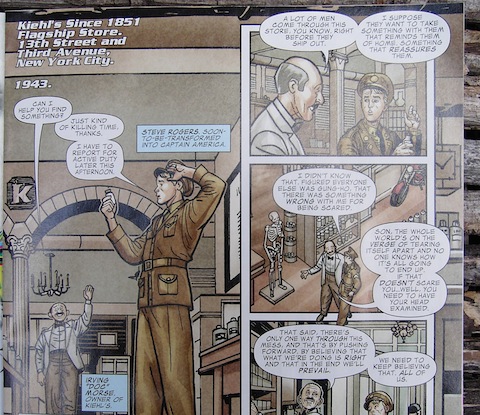 Captain America: Transformation & Triumph is a collaboration between Marvel Comics and skincare retailer Kiehl’s, and it’s been distributed in The Wall Street Journal in major American cities as a promotional gimmick to attract male shoppers (see the AdAge store here). (Comics + WSJ = lots of men, apparently. Well, let’s just go with it.)

The story here is short but fun. It opens in 1943, with Steve Rogers (in his pre-superhero life) browsing in Kiehl’s before he reports for wartime service. He’s assisted by Irving Morse, Kiehl’s owner at the time. 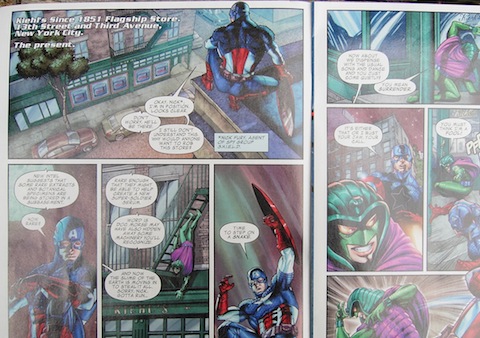 We return to the Kiehl’s flagship store, still located at the corner of Third Avenue and Thirteenth Street in Manhattan, in the present day. “Doc” Morse has passed on, but Steve Rogers, now Captain America, has returned to investigate the imminent theft of some top-secret chemicals stored in the Kiehl’s basement. 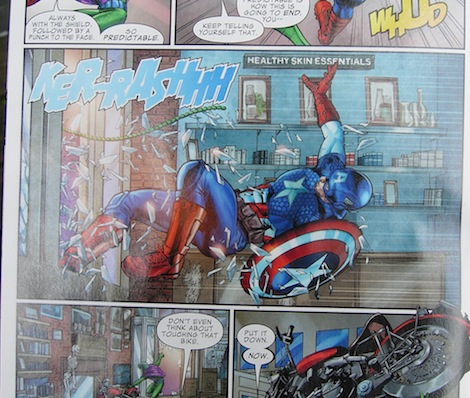 Of course there’s a fight scene, complete with sound-effect bubbles, between Captain American and the mercenary thief Cobra. Shelves of “Healthy Skin Essentials” are visible in the background, and Cobra tries to beat his adversary with a vintage motorcycle displayed in the store (a true-to-life detail).

I asked my husband whether this comic would make him more likely to pop into Kiehl’s to purchase any of the products advertised at the back of the magazine. “I could safely say no,” he replied. He reminded me that Disney now owns Marvel, so that “there will be no end of [Marvel] prostituting themselves.” He’s very serious about his comics.

As for me? I only use a few Kiehl’s products, and many of my favorites have been discontinued since L’Oreal took over the brand in 2000, but I didn’t mind this bit of cross-marketing. However, since I’m not a man, and certainly not a high-earning businessman, I’m not the target audience.

If you have a strong opinion about this promotion, feel free to share!

6 thoughts on “Kiehl’s Gets Comic-al”