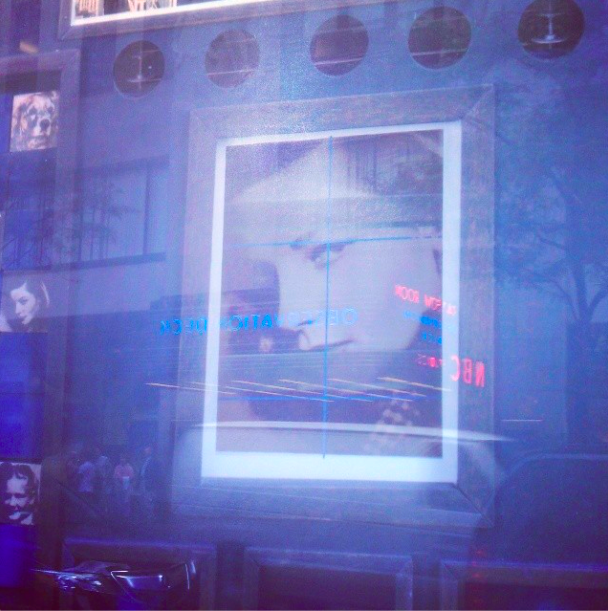 I normally avoid the Rockefeller Center area as one might avoid a plague site or a minefield. However, once in a while I need to stop into Saks, and then I need to find a nearby subway station, so I just put my head down and shove through the crowds.

I’m glad I looked up during my last running of the Rockefeller Plaza gauntlet, however, because I was passing Christie’s and my eyes met those of Ms. Lauren Bacall—at least, a photograph of Bacall, in an oversized reproduction of a Joseph Cornell piece that was recently up for auction.

My snapshot caught the reflections of the neon signage across the street, which was a nice little accident.

You can read more about Cornell’s Penny Arcade Portrait of Lauren Bacall on the Christie’s website. (It’s #5 of 8 images in the slideshow.)

UPDATE, AUGUST 12, 2014: I’ve just learned that Lauren Bacall died today, at the age of 89. She always seemed timeless and ageless to me. I hope that she and her great admirer Joseph Cornell will eventually cross paths at some celestial cocktail party.