I was just cleaning up some image files in my laptop, and I came across this photo. I don’t remember exactly where or when I took it, but the “SMELL” graffiti art still makes me smile. This one goes out to all my scent-obsessed friends!

I normally avoid the Rockefeller Center area as one might avoid a plague site or a minefield. However, once in a while I need to stop into Saks, and then I need to find a nearby subway station, so I just put my head down and shove through the crowds.

I’m glad I looked up during my last running of the Rockefeller Plaza gauntlet, however, because I was passing Christie’s and my eyes met those of Ms. Lauren Bacall—at least, a photograph of Bacall, in an oversized reproduction of a Joseph Cornell piece that was recently up for auction.

My snapshot caught the reflections of the neon signage across the street, which was a nice little accident.

You can read more about Cornell’s Penny Arcade Portrait of Lauren Bacall on the Christie’s website. (It’s #5 of 8 images in the slideshow.)

UPDATE, AUGUST 12, 2014: I’ve just learned that Lauren Bacall died today, at the age of 89. She always seemed timeless and ageless to me. I hope that she and her great admirer Joseph Cornell will eventually cross paths at some celestial cocktail party.

I took these two photographs during my commute one morning last week. I could easily take several similar photos during every morning and evening commute, as well as at my office, to make this obvious point: classic Dr. Marten AirWair boots are back (again). I supposed it’s been a while since their last revival. I’m not sure what exactly prompted this latest wave, but a whole new generation of girls has suddenly embraced them this spring.

These two young women were waiting for a crosstown bus in their purple and oxblood Docs.

END_OF_DOCUMENT_TOKEN_TO_BE_REPLACED 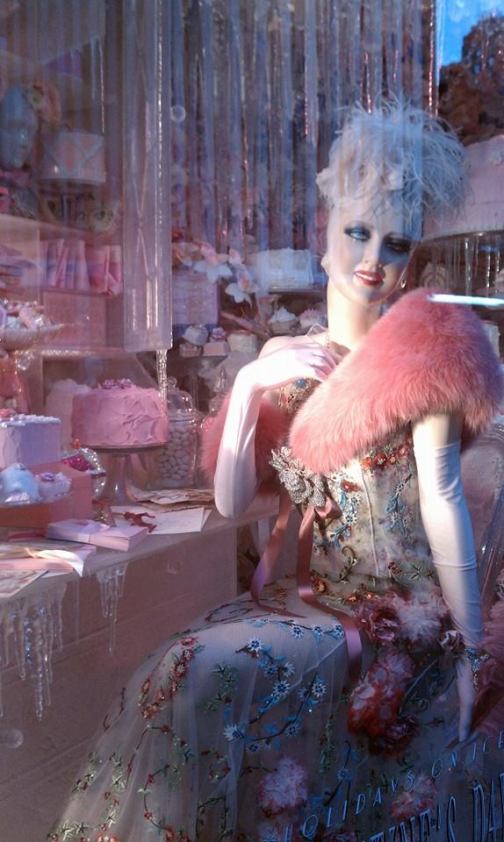 I took this photo on Christmas Day, when Mr. TC and I were taking a quick tour of the store windows on Fifth Avenue. Bergdorf Goodman’s theme for the 2013 holiday season is “Holidays on Ice,” and this window is “Valentine’s Day.” You’re just seeing a detail of it here: the overall scene is complex and magical, and hard to capture on film. But even so, can you spot the pastries and confectionary, and the love letters on the woman’s desk, and the carnations spilling off her gown, and her pink fur stole?!

You can read more about these windows and view official photos at the Bergdorf blog.