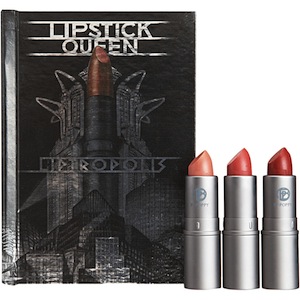 I’ve been a fan of “Lipstick Queen” Poppy King and her various lipstick lines since the early 1990s, so I’m always curious about her newest products. I haven’t seen this one in person yet, but it looks promising: a “volume” of three lipsticks called “Liptropolis.” They’re named for three Manhattan neighborhoods: SoHo (red), Upper East Side (nude), and Central Park (peach). Their texture reportedly falls midway between matte and sheer (or, in Poppy’s parlance, “Sinner” and “Saint.” Of course, New York is a little bit of both…)

According to a recent interview with Poppy King, Liptropolis is an homage to the metropolis of New York City—especially its classic Art Deco skyscrapers, like the Chrysler Building—and to the silent film “Metropolis,” directed by Fritz Lang (1927). (Even if you’ve never actually seen this film, you probably have a general idea of its style: Madonna’s “Express Yourself” video, directed by David Fincher, was an homage to “Metropolis.”)

As you can guess, this is exactly the kind of beauty product that catches my fancy. New York references? Check. Classic film? Check. Lipstick in general? Check. I’m looking forward to entering my own private Liptropolis as soon as I come across these products at SpaceNK or Barneys. ($48 for set of three)