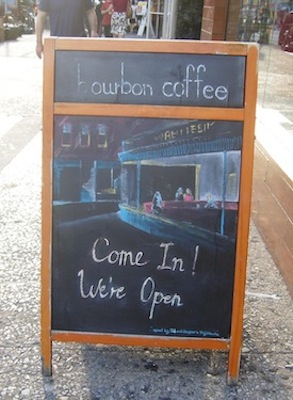 Bourbon Coffee is a café located at 43 West 14th Street in Manhattan, just west of Union Square. 14th Street is something of a thoroughfare, so I’ve passed their front door many times before; this time, however, I had to stop and take a quick picture of their sidewalk sign. It’s an homage to Edward Hopper’s iconic Nighthawks, complete with a credit line in the lower corner. I don’t know who the on-staff artist could be, but he or she did a nice job with this chalk sketch. 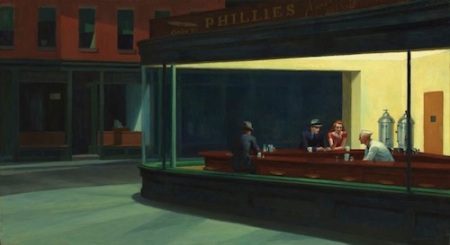 You’ve most likely seen a reproduction of Nighthawks before, but here’s an image from the Art Institute of Chicago website, where you can also learn much more about the painting.

It occurred to me as I passed that Bourbon Coffee is only a few blocks’ walk from the site of Hopper’s longtime studio on Washington Square North. The exact location of the late-night diner that inspired this scene is unknown; most likely, Hopper created a composite of details borrowed from various restaurants he had visited in Greenwich Village. It’s a quintessential New York tableau, and its lack of a specific address makes it all the more timeless.

(In fact, the Greenwich Village Society for Historic Preservation has published a very interesting in-depth study of potential locations for Nighthawks; you can read it here.) 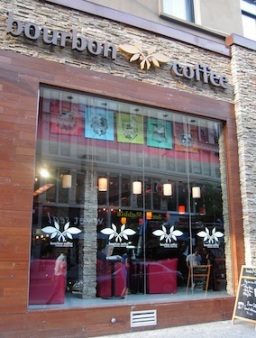 Here’s a shot of Bourbon Coffee’s facade. It’s a far cry from Hopper’s diner in terms of décor and menu—it’s also a lot busier—but it’s still one of the many downtown spots where a New Yorker can stop to be alone with his or her thoughts over a cup of coffee.

Images: Edward Hopper’s Nighthawks (1941) via the Art Institute of Chicago; all photos by Tinsel Creation.

8 thoughts on “On the Street: Edward Hopper and Bourbon Coffee”