This morning, my friend C. and I were enjoying brunch together and were looking through the Sunday Times as we ate. This advertisement for Dior made us both laugh.

It’s titled “Secret Garden 2: Versailles,” and apparently there’s some online video that we can watch to learn more. I haven’t done that yet. I’m more interested in the ad’s visual source, which has nothing to do with Versailles at all. 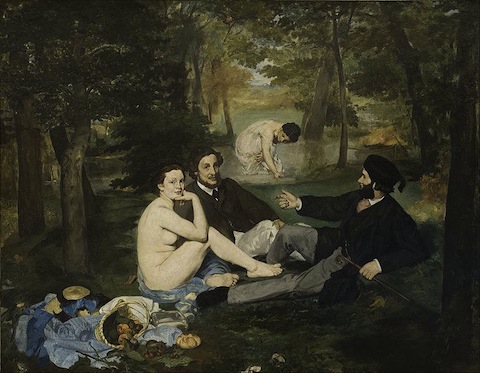 The Dior ad is a contemporary re-staging of Edouard Manet’s Le déjeuner sur l’herbe (Luncheon on the Grass) of 1863, minus most of its original shock value. When first exhibited, Manet’s painting was considered scandalous for its deliberate lack of finish, its flattened perspective, and its subject matter—contemporary Parisians, rather than gods and goddesses, sprawled in such a casual (and co-ed!) manner at their picnic. The original viewers were just as affronted by the naked woman’s direct stare as they were by her naked body.

You can read more about Le déjeuner sur l’herbe on Wikipedia or the Musée d’Orsay website.

Dior isn’t being particularly innovative here; Manet’s proto-Impressionist masterwork has been parodied and reinterpreted more times than anyone can count. 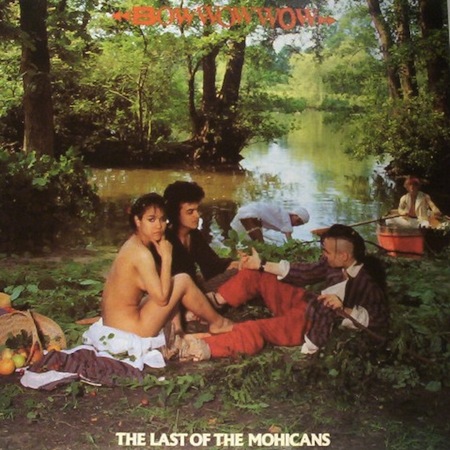 Here’s one of my favorite homages: the cover for the EP album “The Last of the Mohicans” from the British New Wave band Bow Bow Bow, released in 1982.

Dior’s new ad hasn’t raised my interest in owning anything from the brand, but it does make me wonder how many potential customers will catch its art-historical reference.